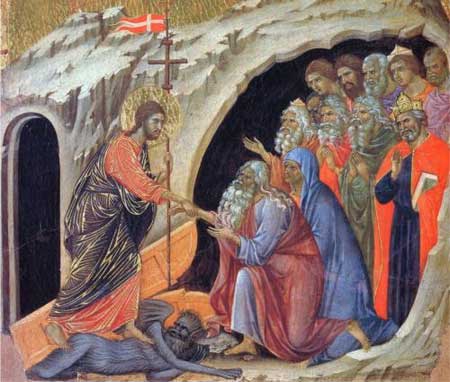 All his sons and all his daughters rose up to comfort him, but he refused to be comforted and said, “No, I shall go down to Sheol to my son, mourning.” Thus his father wept for him.

The above quote comes from the story of Joseph. His brothers, in spite, had just sold Joseph into slavery and then reported him as dead to their father Jacob. Joseph was the favorite son of Jacob, and he is crushed by the news. He basically says that he will mourn until he dies, and then he will go where Joseph is–Sheol.

Sheol, the place of the dead, is where every Old Testament person expected to go. They are divided as to whether the experience will be a conscious or unconscious experience. None of them really look forward to it.

There is an expectation of bodily resurrection someday. This can be found in the oldest book in the Old Testament, Job, and it is briefly taught at the end of Daniel. Time will elapse between their death and the resurrection, however.

As mentioned in previous blog entries, translators have struggled with what to do with word, “Sheol”, and its Greek counterpart, “Hades”. Some translations have decided to make it “the pit”, “the grave” or even “Hell”. Usually it is marked with a footnote acknowledging that the word is “Sheol”. Basically, an admission that the translators were not sold themselves on the translation. For this reason Sheol is unknown to most Christians.

Is Sheol Hell? I capitalize both, because both are place names. And no, Sheol is not what I mean when I use the word “Hell” as a place name. “Hell”, for me, corresponds to the final place of forsakeness and suffering reserved for the damned. This corresponds with the word “Gehenna” or the description, “Lake of Fire” found in Revelation 20. Sheol/Hades is dumped into the Lake of Fire in Revelation 20:14. Clearly, it is a distinct place.

Does Jacob expect to suffer after death then? Not necessarily. Sheol is spoken of 63 times in the Old Testament. I am not certain how the people of the Old Testament acquired their knowledge of Sheol. It may have been from revelation from God, but not necessarily. Near Death Experiences and even the forbidden occultic arts could have given to society scraps of information about Sheol. It is allowed to remain in inspired works because it serves God’s purpose in telling the stories. At no place, is there a theological treatise on the nature of Sheol.

In general, Sheol is described as either unconsciousness or unawareness. It is always pictured as the wages of sin and bad. That makes it surprising that all, even the righteous, express an expectation to go there. Sheol is spoken of in poetic terms in Isaiah. It becomes a synonym for death, even though it retains the nature of a place name.

The Old Testament holds only a very modest hope for eternal life. The most detailed description of life after death applies to the New Earth described in Isaiah 65. This description itself is problematic as it describes existence more in terms of long, pleasant life rather than eternal life.

The lack of information about eternal life and the complete absence of an expectation to go to Heaven raises some interesting questions about the nature of revelation. If one sees the religion surrounding Yahweh (whether Jewish or Christian) as the product of humans, then you would explain the doctrine of eternal life as a development–something added later either because it was borrowed from somewhere else or imagined by somebody later. If, rather, you understand both Old and New Testaments as an ongoing dialogue between God and humanity, you understand that God can reveal information when He chooses to reveal information. Theological development is people having more information then they had before.

Sheol is “developed” by Jesus in the story of Lazarus and the Rich Man. No one would have better and more information about such a place than Jesus. In the story, Lazarus, a poor beggar, dies and is carried to Abraham’s side. The story does not immediately identify where Abraham is. From the Old Testament we should expect that this is Sheol. The rich man also dies and is take to Hades. Here the place is named. He is conscious. He is tormented by flames. Still, he is able to converse with Abraham. Lazarus, however, is being comforted. His place in Sheol is not a place of suffering.

Many jump to the conclusion that Abraham and Lazarus must be in Heaven. That is where the righteous go. But Jesus blocks that conclusion in John 3:13 by telling us that no one has gone into Heaven, at least not yet. Abraham and Lazarus are in a separate parts of Sheol divided by a chasm from the rest, but not prohibiting some communication between the two parts.

Some church bodies have given names to the pleasant part of Sheol. The Catholic Church refers to it as the “Limbo of the Fathers.” Others just refer to it as Abraham’s Bosom. Most just ignore it.

Sheol as a destiny for the righteous awaited the atonement for sins that Jesus would complete. I expect “Abraham’s Bosom” to still exist as a place. But it is now an empty place. Our expectations are now happily turned to Heaven. That humans should occupy Heaven awaited not only atonement but the expulsion of Satan and his minions as described in Revelation 12.

While I don’t need independent confirmation of God’s revelation, it does exist. Near Death Experiences include both seeing Heaven and Sheol as briefly described by Jesus. The expectation of the resurrection of our bodies still stands as a future promise awaiting Judgment Day.

You may surely eat of every tree of the garden, but of the tree of the Knowledge of Good and Evil you shall not eat, for in the day that eat of it you shall surely die.

For us death is the norm. All of us understand that we will one day die; and even if death seems surreal to us now, the day is coming when it will seem quite concrete. It is hard to imagine a world where there was no such thing as death. Death is an integral part of our world now.

Adam and Eve most likely didn’t understand what death was. At least they couldn’t grasp the scope and the gravity of what it meant. One transgression, the only one they could make, would not only be a mistake, it would change the world.

My personal theory is that touching the Tree of the Knowledge of Good and Evil released a means of genetic change. Something like a virus. It infected and changed Adam and Eve and through heredity impacts us all. It also infected and changed, every living thing and made death a part of the “circle of life” which would have been an ongoing line not a circle. Through some other means it also impacted the non-living part of the environment. The world became an unbalanced and dangerous place that didn’t work the way it did at creation. Now it would be far less cooperative. These changes were the direct result of sin. Evil was known because now it was part of the system.

The well-known passage from Romans 6:23, “The wages of sin is death…” has many levels of meaning. The original sin and set of consequences got it all started. This passage is not said to us as if it were something we could really avoid. The story of Adam and Eve is recorded primarily so that we can understand why we, otherwise eternal creatures, live in a system that includes death. We are sinners by birth. The Sermon on the Mount was not given to lay down a list of achievable standards. It is primarily given to convince people that they are sinners. Jesus’ discourse with the “rich, young ruler” was not given to tell people they can save themselves by giving away their wealth to the poor. It was given to convince a man who thought he kept God’s law that he did not. He was a sinner.

If that were the end of the story, then God should have ended the story right after Adam and Eve’s transgression. Why let the rest of us be born into a hopeless situation? But Romans 6:23 says more, “The wages of sin is death, but the free gift of God is eternal life in Christ Jesus our Lord.” Creation was allowed to continue on in its sinful condition because there would be hope of life restored.

The way the “wages of sin” have been paid out has varied over the ages. One aspect of consequences of rebellion has been the aging process. We start moving toward our ultimate physical death immediately. The pace wasn’t always the same. People born before Noah and then tailing off after Noah lived much longer lives. I don’t think this is mythical. Genetic modification done deliberately by God hasn’t the pace. Personally I am not complaining. To live 900+ years in a cursed world is unappealing. In fact, to live the full life expectancy of 120yrs, sounds like 30 years too much to me.

The spiritual aspect has differed too. Before Jesus had made eternal life with God a possibility, humans fell into two categories as they do now. Those who believed God and were claimed by Him and those who remained rebellious. Their fates after death were to be sent to a common place: Sheol (in Hebrew) Hades (in Greek). The only other hope expressed in the Old Testament referred to a resurrection connected to Judgment Day. There was no talk of humans in Heaven at that time. There had been no such promise expressed by God.

As you look for how Sheol fits into the execution of “the wages of sin is death”, it would seem that it was only a partial execution of the Law, especially for the faithful. Though rid of their genetically sinful bodies, the faithful were neither transported into the visible presence of God nor completely banished from God. The story of Lazarus and the Rich Man (Luke 16:19-31) gives the most comprehensive description of what Hades was like. In it, Lazarus is comforted in the “bosom of Abraham”, while the rich man suffers in hellish conditions. The two can communicate but are clearly segregated due to the judgment of their lives that already occurred. The sins of Lazarus, Abraham and other faithful have not yet been paid for by Jesus, neither has a full execution of death. The rich man is suffering a fuller sentence, but has yet to receive full abandonment by God. The experience of the sentence for sin would be radically changed by Jesus’ victory on the cross and then later by Judgment Day.

The wages of sins would fully by paid. It is just of matter of who pays them. For those who believe the judgment of God, that they are sinful, and the promise of God, that their sin can be forgiven, Jesus pays the price. Jesus is forsaken which fulfills the Law. For the rest, Judgment Day brings the final piece. They are put outside of any aspect of God’s presence. This is the ultimate sentence of death. To arrive at this point it takes more than to be born sinful, it takes rejecting God’s own effort to remove the sentence.