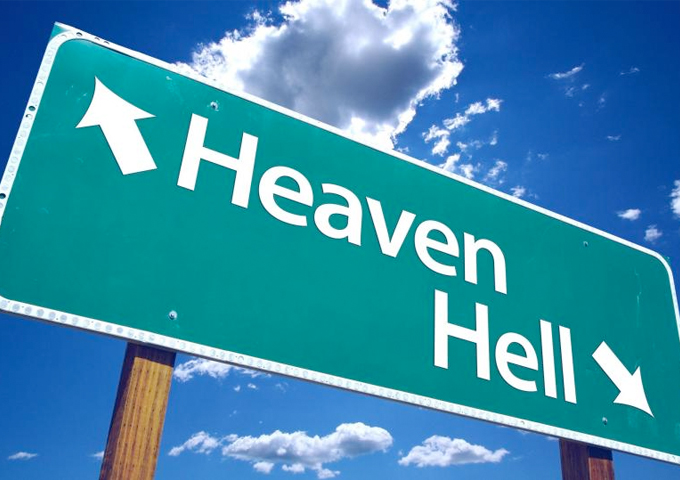 I love the Bible. It has taught me and changed me so much. I understand how it has been transmitted down through history. I have confidence in its divine origin. But there are a couple of passages in the Bible that I just hate. I hate that they are true. No doubt God isn’t crazy about them either. Here is the first:

Jesus’ fulfillment of God’s Law was on behalf of all mankind. His being forsaken on the cross could be for literally anyone. That the reality is that “few” will benefit is tragic. That means “many” will suffer eternally as forgotten by God. I would be thrilled to have this not be true, but I don’t doubt the source.

The other was our “Gospel” lesson just this past Sunday. Jesus speaking:

9 “I came to cast fire on the earth, and would that it were already kindled! 50 I have a baptism to be baptized with, and how great is my distress until it is accomplished! 51 Do you think that I have come to give peace on earth? No, I tell you, but rather division. 52 For from now on in one house there will be five divided, three against two and two against three. 53 They will be divided, father against son and son against father, mother against daughter and daughter against mother, mother-in-law against her daughter-in-law and daughter-in-law against mother-in-law.”

Jesus brings peace with God, which is the most important thing; but that doesn’t equate to peace between humans. A strong Satanic resistance campaign against the Gospel’s spread and acceptance accounts for most of the divisiveness. The rest is sinful human nature. Jesus knows this. Clearly, He isn’t thrilled with the fact; but it is the only way forward.

The result has been divided families all over the world. The consequences of which vary from heartbreak to violence. When somebody becomes a Christian in the midst of a Hindu, Muslim, Buddhist or Jewish home, it doesn’t always or often result in accepting curiosity. Parents, spouses, or extended families can resort to threats, beatings, even “honor” killings. They are worried about family reputation, preservation of culture, and even the response of the gods. Jesus is seen as a Western culture invasion. But Jesus increasingly is not a part of Western culture. Jesus didn’t grow up in the United States or Europe. Jesus was a Jew. His culture is primarily the culture of God, not of some people group.

What Jesus did He did for the whole of Creation. It is a pity that the whole of Creation, especially every human being won’t benefit from it. Division on Earth will result in division in eternity. Some will have been made sinless by the death of Jesus and inherit Heaven and then at Judgment Day a New Earth in addition. Others will find themselves horrible surprised that they are consciously “alive” but excluded from the presence of God. It won’t be because they were not wanted.

When I think about my own “loved ones”, do I think they will all be with me? I hope so. There is a reasonable chance. Amongst the dead, I am not sure about the status of a couple of grandparents. God’s grace is very broad, but I didn’t see convincing evidence that God had reached them. Will my heavenly experience be diminished by their absence?

I answer this with a metaphor. In my yard there were a couple of bare spots where the grass had died. Its loss diminished my yard. Since then, grass has grown in and eliminated the bare spot. My yard looks whole again. And so will we be. We don’t want to lose anybody. Their presence would always improve our joy. We should be willing to take great risks to bring them the Gospel. The rest is on God. But maybe there will be losses. The bare spots will grow in through the beautiful relationships we will have with those who were strangers in life and with the face-to-face presence of God.

A large chunk of the population of the world expects to be reincarnated. This includes Hindus, Buddhists and many other who have incorporated this idea into their “spirituality”. Reincarnation gives the promise of continued life. While judgment or karma is expected and is meant to motivate an unselfish life, reincarnation gives hope for self-progress and self-redemption in the end. It also gives reason to judge people for their current condition and creates a fatalistic attitude with not much motivation to change the world. It is an interesting idea, but is real?

Experience doesn’t settle the question. All of the Near Death Experiences (NDE) that I am aware of have given the individuals who had them an experience of Heaven or Sheol. None have said, I was a dog, worm or even another person. There are some who claim other “memories” experienced in dreams, flashback type of experiences that do give the impression that the person had a previous life. How can this be explained? Perhaps one experiences what they expect in certain neural states. Either type of experience may possibly be introduced by outside spiritual forces (i.e. God, Satan, angel, demons, etc.) to inform or deceive. Whatever the answer, experience is not conclusive.

The Bible rules out reincarnation by giving us a picture of Heaven or Sheol immediately upon death and by these words:

And just as it is appointed for man to die once, and after that comes judgment, so Christ, having been offered once to bear the sins of many, will appear a second time, not to deal with sin but to save those who eagerly wait for him.

Many people are choosing a mixed, and consequently inconsistent, system of beliefs that merge Jesus and reincarnation. Granted these people are hardly what you would call theologians. It is clear for those who know the Bible, that reincarnation is not a part of the human experience if the Bible is truth. Here you have to look at the weight of evidence and have the help of God to understand why the Bible is to be trusted versus any of the writings of Eastern religion.

Jesus comes from a determined place and time, not some vague story. He backed his teachings with miracles before eye-witnesses. He rose from the dead and was seen by both friends, skeptics, and enemies. His coming was accurately foretold by prophets who lived long before him. I don’t think any other self-proclaimed revelation from God can claim such support.

The biggest difference between what the Bible presents as our eternal destiny versus Eastern religions is not the one life versus many. It is that God saves us out of love and does the work Himself versus a system where you raise yourself through lifestyle and knowledge. Wisdom, knowledge, kindness and good works have their place in Christianity, but not as the cause of being saved. They are the result of being saved. We are motivated by love and a sense of God-given mission.

Ironically, Eastern religions are very do-it-yourself compared to Christianity, but the goal is to cease to exist as an individual. One ultimately merges with an impersonal God. In Christianity, Jesus merges you to Himself for the sake of making you righteous and worthy of eternity. He does so without eliminating you as a person. Rather he emphasizes just how valuable you are.

Do not count on having another life and another chance. Definitely don’t count on your own abilities to merit eternal life. Count on Christ.