Lately I have been considering my own health, fitness and appearance. I am 60. I think that I can say that I am in pretty good shape. But I have to add the qualifier: for a 60-year-old. If I were 25, I couldn’t say the same. Our health and appearance is a downward trend. God’s promise is not just that we escape the body. It is that we will receive a resurrected body at Judgment Day. Do we know anything about this resurrected body?

We do. First, it is not merely a repaired body. There were people raised from the dead in the Bible. They were fixed not resurrected. Resurrected is a more comprehensive overhaul. Jesus is the “first-born of the dead”. In other words, Jesus was the first resurrected human. He is also the Son of God incarnate. So as we look at the properties of Jesus’ resurrected body, we can’t be sure if it’s a resurrection property or a property of His divinity.

What stands out as different about Jesus post-resurrection? He is still touchable, He still eats, He still has scars from the crucifixion. These things are actually a little surprising, but good. Jesus is recognizable, but not always. The disciples on the road to Emmaus do not recognize Him until He breaks bread and then He disappears. Did Jesus change His appearance or mess with their minds? We don’t know.

Jesus also is able to appear inside the house where the disciples are hiding. The doors were locked. While I do not expect to be a shapeshifter or to impede the thinking of others, I would not be surprising if a resurrected body can move differently. The phrase “new heavens and new Earth” refer to the remaking of this universe. I don’t expect our domicile to be just another planet. I expect it to be a whole universe. If that is not enough to keep us engaged forever, I have an even stronger expectation that we will be able to move from Earth to Heaven and Heaven to Earth.

References to “heavenly bodies” in 1 Corinthians 15 and to “further clothed”, “eternal in the Heavens” in 2 Corinthians 5 leads me to understand that we will have a body that is meant for the time-space of Heaven, which I expect is parallel to this universe. A resurrected body is for this universe. To connect them both is a gift that makes us similar to angels as far as movement. This may also give us the ability to move at will great distances in this space.

Resurrected bodies also come into play in Isaiah 65. As noted in the article Wrestling with Isaiah 65, https://wordpress.com/post/afterdeathsite.com/1982, the text of Isaiah 65:17-25 may not be very literal. Some possibilities that arise from this section are: the ability to procreate; the ability to age well, die, and regenerate; the ability to work without laboring; and the ability to live in harmony with nature.

Will the resurrected body be indestructible? 1 Corinthians 15:42-44 speaks of this body:

The resurrection of our bodies is something that happens to both the righteous and the unrighteous according to Daniel 12:2-3. But those whose names are not “written in the book” because they are not connected to Jesus will have a different fate.

For behold, the day is coming, burning like an oven, when all the arrogant and all evildoers will be stubble. The day that is coming shall set them ablaze, says the Lord of hosts, so that it will leave them neither root nor branch. 2 But for you who fear my name, the sun of righteousness shall rise with healing in its wings. You shall go out leaping like calves from the stall. 3 And you shall tread down the wicked, for they will be ashes under the soles of your feet, on the day when I act, says the Lord of hosts.

The resurrected bodies of the unrighteous are apparently not imperishable. Imperishable, even for the righteous doesn’t necessarily mean that you can’t damage them. The Trees of Life found in the New Jerusalem (Revelation 22) are for the healing of the nations. “Healing” can mean a lot of things, but it could be a reference to resurrected body repair.

It typical for people to just think of going to Heaven. A New Earth, much less a resurrected body, is not on their radar. But these things are written about more than Heaven. A resurrected body is part of the package. Perhaps you are looking forward to the trade-in. 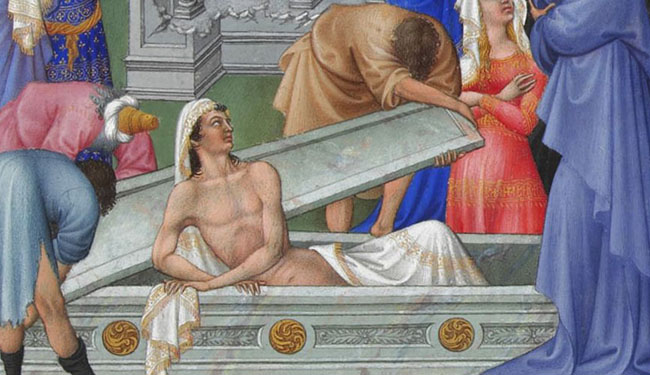 Everybody knows that we are going to die. It often doesn’t bother a person until death gets near. That makes it seem real. Once death gets real, some resort to extreme means in hope of sustaining their physical life. This is nothing new.

Myths like the “Fountain of Youth” were the vain quests of early explorers. The preservation of life through magical means or within some captive confines are found in various movies and literature. More seriously, some people have had their bodies cryogenically frozen in hopes of being thawed, fixed, and re-animated.

Jesus and the prophet Elijah raised people from the dead. While the stories of Lazarus and others were not continued. It can be assumed that they died again later.

Scientific research is being dedicated to identifying factors that limit physical life to the observed 120 years. This includes genetic manipulation among other things.

The expectation and hope of physical eternal life is a well established thing. Is it possible? Within our current genetic structure the answer would seem to be “No”.

The Bible speaks of a resurrected body and eternal physical life. This is different from other world religions which hang their hope on leaving the body and gaining a form of spiritual, conscious, eternal life. The Bible doesn’t discount that life removed from our current bodies is a part of the plan. In fact, the Bible hints at there being a “heavenly” version of our bodies.https://wordpress.com/block-editor/post/afterdeathsite.com/862

Though we may greatly desire for eternal physical life to be true, it is common to dismiss physical eternal life as wishful thinking. The people of Corinth clearly did this and Paul addresses this in 1 Corinthians 15:12-14. Our physical bodies are currently fraught with flaws, we are altered by sin, and programmed to die. It would not be desirable to continue even to our current limit of 120 years with this body, in my opinion. But this doesn’t mean that God can’t create something different, enduring, good and uniquely ours. Consider our own capabilities of genetic manipulation and cloning, this should not be too great of a leap of faith. Maybe we can’t do it, but the original designer certainly can.

The raw materials for such a resurrection, may or may not, be the remains of our physical bodies. Paul uses the analogy of a seed. Our remains are the seed, but it is not clear what exactly about our remains are seed-like. The Bible does not seem to demand that our dead bodies be disposed of in a particular way. God is able to raise anyone. I expect it is some element of our design that is the seminal beginning of our resurrected bodies, and that is probably not in the DNA we are using now.

For that reason, I do not expect to raised where I was planted. I will be raised on the New Earth right where God wants me. Cemetery location and who I am buried with is more for the benefit of those who continue to live after us.

Plodding on, at great expense, with the damaged version of our bodies that we have now is not the way to go. There is no “Fountain of Youth” or science that can beat death. There is the power of our original designer and the promise of eternal life through Jesus Christ. That is a hope that has already been demonstrated with the resurrection of Jesus, and it is offered to those who will trust in Him.