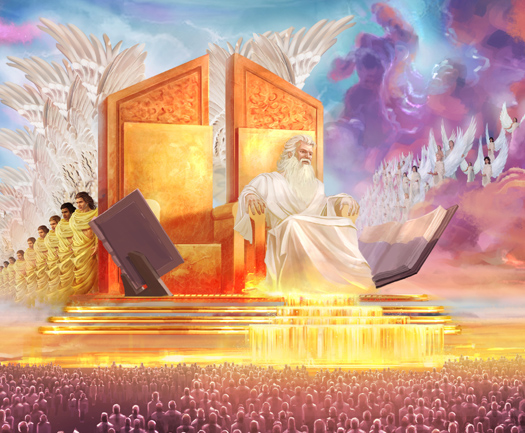 Most of the information that we have about Heaven comes in the form of visions.  It is important to note that visions are not field trips.  They are messages.  As such, they come embedded with symbolic meaning or modify the reality of Heaven so that we can comprehend it.  One such vision is found in Daniel 7.

As I looked, thrones were set in place, and the Ancient of Days took His seat. His clothing was as white as snow; the hair of His head was white like wool. His throne was flaming with fire, and its wheels were all ablaze. A river of fire was flowing out from before Him. Thousands upon thousands attended Him; ten thousand times ten thousand stood before Him. The court was seated, and the books were opened.

Here is a description ripe for misinterpretation. Remember that this is a vision, not a heavenly version of C-Span, where Daniel is watching the actual proceedings. Not only are we told that no one has gone into Heaven, we are also told that no one has ever seen God. So, even though Daniel describes God on His throne, he is not actually observing God. This image described here is then a symbolic image or manifestation for Daniel’s benefit. We would therefore be errant to conclude that God is an old man in a flaming wheel chair. First, the hair is white, not because of age, but because of glory. When Jesus appears gloriously in Revelation 1 his hair is also “white like wool”. The wheels referred to in Daniel no doubt correspond to “wheels” that are described in Ezekiel 1. The function of these “wheels” is unknown. Their description sounds somewhat like a gyroscope, but they are definitely not the wheels of a wheelchair.

What do we learn about Heaven from this reading?   For one, humans will not be alone there. God is attended by thousands and ten thousand times ten thousand (100 million or so) stood before Him. Thousands and millions of what? Not humans according to Jesus. These must be angels. Angels are not humans. They are a species all of their own.

It would also seem that God doesn’t just sit on a throne all the time. The court was seated, suggesting that there is somewhere else to be beyond the throne room.

The last thing to point out in this reading is the river of fire. In Ezekiel 47 and Revelation 22 a river of living water flows from the temple of God. In those passages the message is of God’s blessing. Here in Daniel the message is of impending wrath upon certain nations. In both cases the river is most likely a manifestation of the Holy Spirit. Jesus refers to the Spirit as living water, but juxtaposition would suggest that the river of fire is also the Spirit.

The throne room of God can seem like a very alien place, and indeed it is. From bizarre creatures like the Seraphim to the multi-formed presence of the Spirit, you might find it rather frightening in description. It is true that this isn’t your living room, but, though unworthy, it is by grace that we are invited to come to this place. Far from frightening, the experience of God’s throne room will be glorious.